One of the most incisive arguments I’ve ever heard about climate change came from Elon Musk, the guy who founded Tesla Motors. He started out with a simple inescapable fact: the supply of fossil fuels is very limited and sooner or later we will need to find another source of energy, because at the rate we’re using it we’re going to run out.

If we know we have to get off oil no matter what, we know that is an inescapable outcome, why run this crazy experiment of changing the chemical composition of the atmosphere and oceans by adding enormous amounts of CO2 that have been buried since the Precambrian Era? That’s crazy. That’s the dumbest experiment in history by far.

I like this because the simple elegant logic of his argument cuts right through the insanity of Washington’s current climate change “debate”.

It is sad and frustrating to me that our politicians waste so much time arguing about whether climate change is happening, when the available evidence strongly suggests it is and the debate we should really be having is about how to solve the problem. I don’t want to spend too much time on the science of climate change, because it’s been covered in great detail elsewhere, but here’s the story in a nutshell (for any of you who’ve been living in a hermit cave without access to the news for the last ten years.)

It’s easy to measure CO2 concentrations; there is no doubt they’re rising for years and that human activity is involved in this. The data below is from NOAA; notice how CO2 concentations vary slightly over the course of the year (red line) but over the course of 30-40 years the trend (black line) is extremely clear. 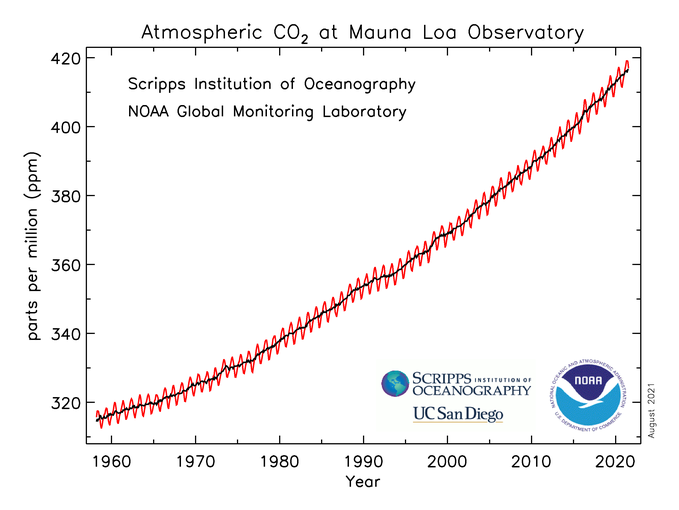 We know increasing CO2 concentrations will affect Earth’s climate. The surface temperature of the sun is ~5778 degrees Kelvin, whereas the surface temperature of the Earth averages about 288 degrees Kelvin, with substantial variation depending on time of day/year and location. That’s why the bulk of the radiation from the sun and from the Earth lie in very different regions of the spectrum:

Earth’s atmosphere (as illustrated) is transparent to much of the incoming solar radiation, but certain so-called greenhouse gases in Earth’s atmosphere, especially water vapor and carbon dioxide, absorb very strongly in the regions of the IR spectrum where Earth’s ~288 K surface emits the most radiation. When radiation is absorbed, it’s converted to heat* or random motion of molecules. As these gases warm up, they will eventually re-emit the energy they absorbed in the form of infrared radiation; but by absorbing then re-emitting, they slow down the loss of heat from Earth’s surface, and that causes Earth to remain warmer than it would be otherwise, in the same way a blanket keeps you warmer by slowing the rate of heat loss from your surface.

Increasing the concentration of greenhouse gas in our atmosphere must ultimately affect the climate, although how much is complicated because there are so many feedback loops involved. Increasing temperature, for example, causes more water to evaporate which increases concentrations of water vapor (a greenhouse gas) but also increases cloud formation, reflecting more incoming light into space. Nonetheless, given that CO2 concentrations are increasing, we would ultimately expect global temperatures to show some corresponding increase. This too is very complicated because temperatures vary so much depending on location, time of day, time of year etc., so while measuring the temperature is easy, trying to come up with a representative global average is not. The data below is from NASA: 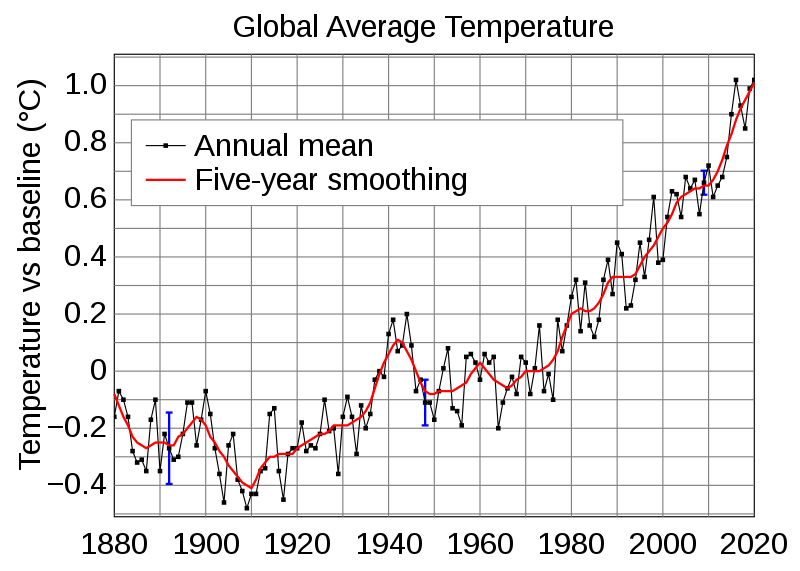 What we see matches what we predict we would see based on the observed increase in CO2 concentrations — a corresponding slight increase in average temperatures. I’m deliberately keeping things simple here and avoiding some more complicated discussions we could get mired in, but those are the fundamentals.

We could of course spend plenty of time arguing about how much the climate will change as a result of all this, exactly how far temperatures will rise in the years ahead or how significant that change will be. This is to my way of thinking a fruitless argument, because — as Musk pointed out — we are in effect right now running an experiment to see how much we can change the climate. We may not know for certain how this experiment will turn out, but quite frankly we probably don’t want to find out. This experiment is dangerous and also pointless, because eventually we’re going to run low on oil anyway. We have to switch, so why not do it sooner rather than trying to see how much we can change the climate in the meantime?

We don’t of course want to solve this problem by damaging or destroying the economy. Nobody wants to be unemployed. I get a little nervous when people start talking about taxing carbon, for example; I could be wrong, but I feel like implementing a carbon tax is a great way to make manufacturers move their operations to other countries that don’t have carbon taxes. So I think this boils down to two questions. What alternative energy sources are most viable right now (or could become viable with a little more research)? And how could we promote their adoption without damaging the economy?

This is the climate change debate we should really be having and aren’t. So here’s where I want to editorialize a bit.

The first alternative might seem controversial because the Fukushima disaster has made nuclear power plants extremely unpopular. But the simple fact, I think, is that if you’re talking about switching over to electric cars, you’re going to need a huge amount of additional generating capacity, and with existing technology the only non-fossil way to supply that is nuclear. Solar and wind are only viable alternatives in certain regions of the country. Definitely they should be fully exploited in those regions. But the simple fact is that with existing technology you can’t power Seattle with solar panels; they don’t get enough sun most of the year. So if you’re talking about switching to trains and electric cars (Musk’s preferred solution), ultimately I think over much of America you’re talking about switching to nuclear power.

Should we learn to like nuclear power? This is a debate we need to have, I think, although right now politicians won’t touch it with a ten-foot pole. Nuclear is definitely an abundant source of energy that doesn’t generate greenhouse gas during operation. The main problems are how to store the waste — reprocessing it would significantly reduce its volume but is expensive, and of course you’re still left with some waste that has to be buried. There’s no state that wants a long-term waste repository anywhere within its boundaries, not even Nevada. Moreover, if there’s one lesson we learned from Fukushima, it’s that nuclear power stations don’t mix well with tsunamis and major earthquakes, and locations for nuclear power plants would have to be carefully chosen with that in mind. The Pacific Northwest, for example, is apparently due for a massive 8.0 – 9.0 earthquake/tsunami at some point in the next century, and locations for any nuclear power plants built in that region should be chosen and designed with that in mind.

If you find nuclear unpalatable you may prefer biofuel, although you have to be careful to specify what kind kind of biofuel you’re talking about. There’s no way you could power America on corn starch ethanol, for example; you can’t grow enough corn to do it. Ethanol from cellulose, however, or fuel from algae are options that could work, although neither is yet practical on the scale you’d need to generate such large quantities of fuel. It’s going to take more research and more work to make them commercially viable.

Algae biofuel, for example, faces some interesting technical challenges. If you want to grow algae in open ponds, for example, your algae becomes vulnerable to competition from other unwanted strains and from bacteria, competition that could quickly kill off your chosen high-oil-yield strain and take over the pond. To make matters worse, harvesting/extracting the oils you actually want from the algae in your pondwater is expensive. If you grow algae in glass or plastic tubes, aka “photobioreactors”, by contrast, production becomes still more expensive and now you suffer from space constraints. There may be ways to overcome these challenges, but it’s going to take more work to do it.

Cellulosic ethanol likewise faces some technical hurdles. Cellulose is also called “dietary fiber”; it’s the stuff plant cell walls are made of, and as such it’s one of the most abundant polymers on Earth. Like starch, it’s a polymer made of glucose sugar molecules. The difference lies in the way the sugar molecules are linked, which makes it more difficult to break down than starch. We definitely can break it down, either with enzymes we’ve borrowed from various bacteria or with a chemical process, and you can feed the resulting glucose sugars to yeast to make ethanol just like you would if you were going to make liquor. The problem however is efficiency, scale and cost. There’s a huge difference between turning out a million barrels a day and — oh, look, we made a gallon of this in my lab! That’s the gap which both algae biofuels and cellulosic ethanol are still crossing.

To my mind this is the climate change debate we should be having. Do we want to embrace the train and the electric car (short-range as it is) and start building more nuclear power plants? Do we want to invest in biofuels research and scale-up? This is a tricky and interesting challenge and it’s one we need to figure out. And if we can pick a good solution, we can do so in a way that rather than damaging our economy will spur economic growth. Building power plants or biofuel production facilities is creating jobs, after all.

Instead, of course, our politicians are wasting time bickering about whether there’s even a problem.

*I’m using the everyday definition of heat as “hotness” or increased temperature here, not the more specific thermodynamic definition.