California governor Jerry Brown recently signed into law a bill that eliminates religious or philosophical exemptions for childhood vaccines. Under the new law, parents may only opt out of vaccinating their child if a doctor signs off on a medical exemption.

The new law was controversial for a while, especially among California’s small but vocal anti-vaccine movement. Prominent vaccine opponent Jim Carrey, for example, made a few headlines with a twitter rant that compared the new law to fascism. (You just couldn’t make this stuff up.)

And apparently a string of tweets in more or less the same vein. “They say mercury in fish is dangerous, but forcing our children to be injected with mercury in thimerosal is no risk. Make sense?” etc. Just to clarify, he added that he is not anti-vaccine but “anti-toxin” apparently..

It’s the same old tired nonsense anti-vaccine groups have been spreading for years. Never mind that none of the vaccines administered to children (with the exception of some flu vaccines) contain thimerosal, and that the dose of thimerosal in a vaccine was tiny to begin with. Never mind that all the plant food you eat contains some aluminum, because aluminum is one of the most common elements in the Earth’s crust, you find it in many soils in the form of aluminosilicate minerals, and various plants take up small amounts, so your diet regularly exposes you to significantly more aluminum than you get from a vaccine. The average human naturally contains somewhere between 30-50 mg of aluminum at any given time, mostly in your bones although blood typically contains 1-3 parts per billion of aluminum — and all of that is again completely normal; it’s a result of dietary exposure. And never mind that a baby’s blood naturally at any given time contains over ten times more formaldehyde than any shot.

I’ve blogged about this before and briefly talked about some of the chemistry; none of that has changed. Jim Carrey’s argument about aluminum and formaldehyde (given that thimerosal isn’t even included in children’s vaccines, it’s kind of irrelevant) is much the same as if I were to argue that coffee is lethal because a tablespoon of caffeine is probably enough to kill you. That part is absolutely true; a high school student tragically died after drinking a beverage he made with caffeine powder last year, for example. But it’s also true that a tablespoon of caffeine is more than you would get from fifty to eighty cups of coffee, depending on what kind of coffee you’re drinking. As always, the questions Carrey should ask are:

1) how long does this chemical stay in the body (how rapidly is it metabolized/excreted),

2) what are the effects of this chemical and what kinds of concentrations are required to cause those effects, and

3) what kind of dose is required to reach a dangerous concentration (given the rate at which the chemical is metabolized/excreted).

Or you could just ask “what is a dangerous dose”? Which is kind of the three questions above just rolled into one. Anyhow.

But let’s leave aside specific ingredients here for a minute and ask what’s the evidence on safety for vaccines as a whole. There have been numerous large studies looking for statistical correlations between vaccines and autism and a variety of other disorders. No evidence of any connection was ever found. This 2009 paper summarizes some of the data available in 2009; there is even more data available now and the conclusion has not changed.

Part of it is that we humans are so good at spotting patterns and correlations we find them even where they don’t actually exist; where they’re just a narrative our minds have imposed onto real events. As Paul Offit pointed out, roughly 50,000 British children received the MMR vaccine every year in the late 90s; usually they were between ages 1 and 2, an age at which autism is often diagnosed. Given the number of children immunized and the number of children diagnosed with autism each year, statistically the odds are that in any given year 25 children will be diagnosed with autism shortly after they are vaccinated simply through sheer chance. Even though there is no link, the parents will assume there is a link because the one happened shortly before the other. It’s a little like if you got a call on your cell from an area code you didn’t recognize, say 303, and got in a car wreck three minutes later. Even the most level-headed of us might wonder for a moment whether there was some connection, even though there is obviously no connection between the call and the crash. But the human brain always tries to find connections, and when one event precedes another we tend to wonder if they might be linked (even if they aren’t).

Bear in mind this pattern-recognizing ability is actually one of our great strengths; in fact, our ability to recognize and remember patterns is arguably one of the traits that makes us good at science (at figuring out the natural world). XKCD cartoonist Randall Munroe once pointed out, for example, that if I show you a picture of an adult angrily talking to a kid with a lasso while a cat investigates a broken lamp in the background, your brain will immediately guess what happened. While a supercomputer that can do calculations many times faster than you would have no way to figure out what happened in that picture, at least not as quickly as you could. Which suggests that humans tend to be good at one kind of thinking, while computers tend to be good at another, and that this may remain true even once current limitations in software are surpassed. (I like to speculate that if self-aware computers are developed and go to war with us a la Terminator, the very different ways in which humans and computers think would make such a war more asymmetrical than any other in our history. Each side would have certain advantages because the ways in which human brains and computers function are so different. But I’ll stop there, because I’m speculating wildly…and getting way off topic.) We’re so good at recognizing patterns we can find faces in clouds and shapes in static. And that’s where we have to be careful. We are almost too good at spotting possible correlations. As I like to point out: 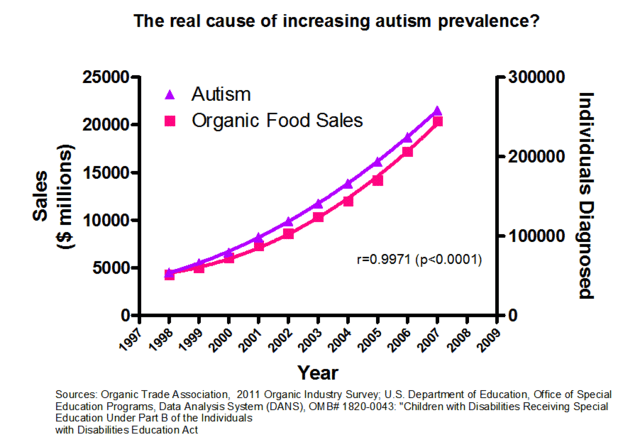 Do you really think organic food is actually the cause of autism? This sounds silly, but keep in mind that some anti-vaccine folks have made exactly the same argument vis-a-vis the MMR vaccine and autism.

Another part of it of course is that once you start a controversy it’s very difficult to end it. There are always a handful of conspiracy theorists and other tinfoil-hat types out there who will keep pretty much any controversy going for years or even decades after it should have ended. Even leaving the wingnuts aside, however, I think controversies of this kind tend to take on a life of their own because it’s much easier to scare people than to reassure them. And that’s where I fault the people who originally started this controversy; British doctor Andrew Wakefield and the journalists who briefly made him a household name.

Also I think many people don’t realize how dangerous some of these vaccine-preventable diseases truly were. Take pertussis. About half of all babies who get whooping cough will end up in the hospital. Of those who are hospitalized, one in four will get pneumonia; two-thirds will have slowed or stopped breathing, and 1.6% or 1-2 in a hundred will die. And all this is with appropriate medical treatment. (You can imagine what it was like before modern medical care.)

Or take diphtheria. According to the CDC, the fatality rate for diphtheria is 5-10%, and in kids under five it’s more like 20%. (Back before modern medical care it was 50%). That means even with appropriate medical treatment as many as 1 in 5 small children infected with diphtheria will possibly die.

And OK, sure, rubella is significantly more mild; the fatality rate for this disease is low. Only problem is, ~90% of pregnant women who get rubella will pass it to their fetus, which can cause either birth defects or miscarriage. That’s kind of a problem. Before the vaccine, an estimated 4 out of every 1000 babies was affected with birth defects or problems caused by a rubella infection.

So what I’m trying to say is…this is not your common cold. These are nasty diseases. These are not diseases you want spreading around.

And perhaps it would be good for the anti-vaccine folks out there (the ones still fighting anyway) to take a moment and think about that. We’ve managed to largely eliminate diseases like diphtheria and pertussis, and we’re saving millions of lives. If we can completely eliminate some of these diseases around the world as we did with smallpox, we can eventually stop vaccinating for them altogether, the same way we did with smallpox. (It will take some international cooperation to make that happen, but if we can work together to make it happen it would be awesome.)

And to Jim Carrey and those of like mind. If you are still worried about the safety of vaccines, please, read up on it (and I don’t mean trawling Google for random crank websites — you’re in real trouble if you believe everything you read on the Internet). Try that 2009 paper I linked to for example; or try this list of studies on vaccine safety. Please read up on this before you keep making the same tired nonsense arguments about it. Because this is getting kind of old already.