Researchers in South Korea have developed a solar-powered photocatalytic system that splits water to generate hydrogen gas, which it then uses as a reducing agent to perform denitrification. By generating the hydrogen gas in situ, the system can convert nitrate into dinitrogen without requiring the addition of any other reducing agents.

Nitrate is a major aquatic pollutant, and is commonly linked to excessive agricultural fertiliser use or domestic and industrial sewage. Current methods for nitrate removal include solar denitrification and cocatalyst-loaded photocatalysts. However, their practical applications are limited due to the release of harmful byproducts such as nitrite and ammonium, and the need for external reducing agents.

To overcome these challenges, Wonyong Choi of Pohang University of Science and Technology and colleagues have developed a denitrification photocatalyst that generates its own reducing agent. The new photocatalyst comprises a copper–palladium catalyst and reduced graphene oxide on a titanium dioxide composite. Copper catalyses the conversion of nitrate to nitrite and palladium catalyses the conversion of nitrite to dinitrogen as well as production of hydrogen gas.

While the team found that the photocatalyst alone could convert nitrate into nitrogen gas, introducing reduced graphene oxide as a charge transfer mediator increased the production of hydrogen gas. The synergic action of the various components in the system enables the in situ generated hydrogen gas to be used immediately for transforming nitrate into dinitrogen. 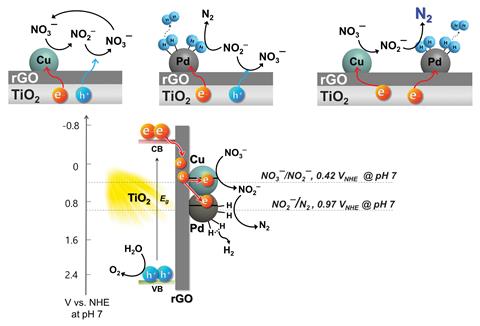 The team showed that the system directly converted almost 100% of nitrate into dinitrogen. ‘Because photocatalysts can have a water splitting capacity to generate hydrogen, if you can combine this property with the denitrification property of the photocatalyst, I think it is possible to achieve complete conversion of nitrate to nitrogen without supplying hydrogen gas as the external reagent source,’ says Choi when explaining the significance of coupling water splitting to denitrification.

‘All previous studies of the photocatalytic nitrate reduction employ chemical reduction agents, for example, organic acid, alcohol or hydrogen gas,’ says Choi. ‘Toxic byproduct formation was observed when you use chemical reducing agents, but in our case, that kind of byproduct generation was negligible.’

‘Solar-driven conversion of nitrate into dinitrogen combines the best of two worlds, by using sunlight, an inexhaustible energy source for activating the reaction, and water as the source of the reducing agent,’ comments Cláudia Gomes Silva, who develops photocatalytic systems for environmental applications at the University of Porto in Portugal. ‘This work is a step forward towards the development of solar-driven technologies as sustainable and efficient routes to overcome global development goals related to water availability and renewable energy sources.’

The team is currently investigating how to scale up their system. ‘A limitation we have to overcome in the practical application is we need an anoxic system. Practically, making an anoxic system requires a significant amount of energy,’ says Choi. Future work for the team will therefore investigate how to effectively apply the denitrification photocatalyst in the presence of dissolved oxygen.