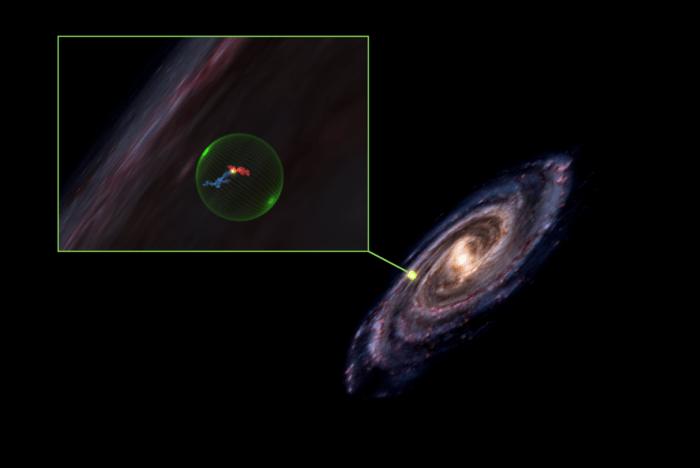 Astronomers analyzing 3D maps of the shapes and sizes of nearby molecular clouds have discovered a gigantic cavity in space.

The sphere-shaped void, described today in the Astrophysical Journal Letters, spans about 150 parsecs — nearly 500 light years — and is located on the sky among the constellations Perseus and Taurus. The research team, which is based at the Center for Astrophysics | Harvard & Smithsonian, believes the cavity was formed by ancient supernovae that went off some 10 million years ago.

The mysterious cavity is surrounded by the Perseus and Taurus molecular clouds — regions in space where stars form.

“Hundreds of stars are forming or exist already at the surface of this giant bubble,” says Shmuel Bialy, a postdoctoral researcher at the Institute for Theory and Computation (ITC) at the Center for Astrophysics (CfA) who led the study. “We have two theories—either one supernova went off at the core of this bubble and pushed gas outward forming what we now call the ‘Perseus-Taurus Supershell,’ or a series of supernovae occurring over millions of years created it over time.”

The finding suggests that the Perseus and Taurus molecular clouds are not independent structures in space. But rather, they formed together from the very same supernova shockwave. “This demonstrates that when a star dies, its supernova generates a chain of events that may ultimately lead to the birth of new stars,” Bialy explains.

The 3D map of the bubble and surrounding clouds were created using new data from Gaia, a space-based observatory launched by the European Space Agency (ESA).

Descriptions of exactly how 3D maps of the Perseus and Taurus molecular clouds and other nearby clouds were analyzed appear in a separate study published today in the Astrophysical Journal (ApJ). Both studies make use of a dust reconstruction created by researchers at the Max Planck Institute for Astronomy in Germany.

The maps represent the first-time molecular clouds have been charted in 3D. Previous images of the clouds were constrained to two dimensions.

“We’ve been able to see these clouds for decades, but we never knew their true shape, depth or thickness. We also were unsure how far away the clouds were,” says Catherine Zucker, a postdoctoral researcher at the CfA who led the ApJ study. “Now we know where they lie with only 1 percent uncertainty, allowing us to discern this void between them.”

But why map clouds in the first place?

“There are many different theories for how gas rearranges itself to form stars,” Zucker explains. “Astronomers have tested these theoretical ideas using simulations in the past, but this is the first time we can use real — not simulated — 3D views to compare theory to observation, and evaluate which theories work best.”

The Universe at Your Fingertips

The new research marks the first time journals of the American Astronomical Society (AAS) publish astronomy visualizations in augmented reality. Scientists and the public may interact with the visualization of the cavity and its surrounding molecular clouds by simply scanning a QR code in the paper with their smartphone.

“You can literally make the universe float over your kitchen table,” says Harvard professor and CfA astronomer Alyssa Goodman, a co-author on both studies and founder of glue, the data visualization software that was used to create the maps of molecular clouds.

Goodman calls the new publications examples of the “paper of the future” and considers them important steps toward the interactivity and reproducibility of science, which AAS committed to in 2015 as part of their effort to modernize publications.

“We need richer records of scientific discovery,” Goodman says. “And current scholarly papers could be doing much better. All of the data in these papers are available online — on Harvard’s Dataverse — so that anyone can build on our results.”

She says, “It’s 3D visualizations like these that can help both scientists and the public understand what’s happening in space and the powerful effects of supernovae.”