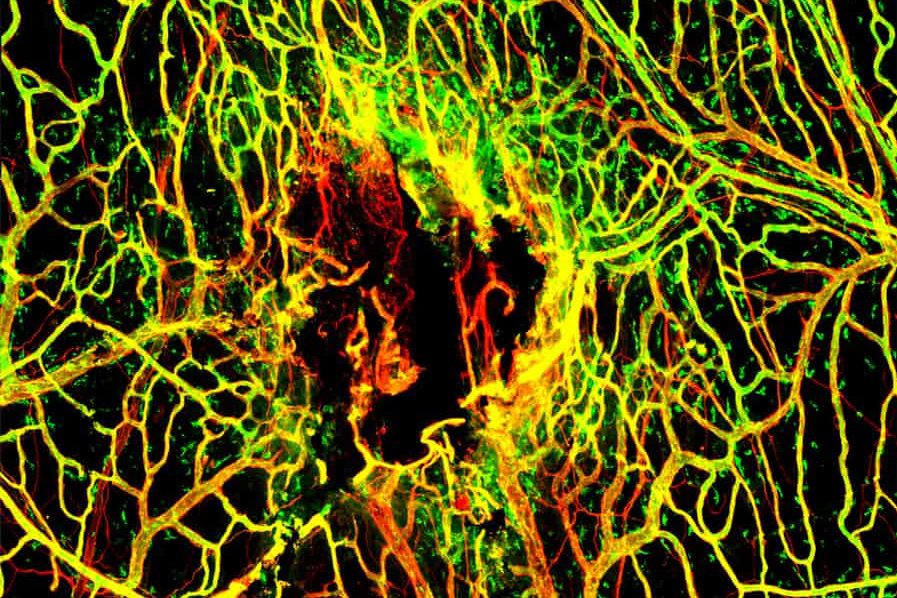 Traumatic brain injury (TBI) and other injuries to blood vessels in the brain, like stroke, are a leading cause of long-term disability or death. Researchers at the National Institute of Neurological Disorders and Stroke (NINDS), part of the National Institutes of Health, have found a possible explanation for why some patients recover much more poorly from brain injury if they later become infected. The findings were published in Nature Immunology.

Making use of a mouse model for mild TBI (mTBI) that they had developed previously, the team of researchers led by NINDS scientist Dorian McGavern, Ph.D., discovered that viral, fungal, or a mimic for bacterial infections all impacted blood vessel repair within the meninges, the protective covering of the brain. When they looked closer, they observed that some cells of the immune system no longer moved into the site of the injury, which occurred in the uninfected animals, suggesting they were responding to systemic infection. The study also looked in a second injury model affecting the blood vessels in the brain, called a cerebrovascular injury (CVI), and saw a similar effect on repair.

“Evolution prioritizes mobilizing the immune system to fight off infection over repair,” said Dr. McGavern. “Because the body is dealing with a greater threat, cells that would normally repair the damaged blood vessels in or around the brain are needed elsewhere.”

This change in priority for the immune system is not permanent, as infected mice were able to eventually repair the blood vessel damage at a later time compared to uninfected mice, unless a second infection was encountered. This timing is especially critical in the case of CVI mice, because the delay in response produced by infection led to permanent cognitive dysfunction and damage to the brain tissue. The repaired brain blood vessels, which are normally very well sealed, remained permanently leaky.

“The presence of infection causes the immune system to take a break from repair while it fights off the virus,” said Dr. McGavern. “In the case of mild TBI, this seems to be ok, but when you have a large vascular injury in the brain itself, like a stroke, every minute counts. These findings highlight the utmost importance in quickly identifying and treating infections in patients.”

Although the presence of infection was affecting the immune system’s ability to respond to mTBI, the exact cause remained unknown. When cells in the body become infected, they call for help by releasing proteins that signal the immune system. One group of proteins released after viral infection are called type I interferons (IFN-I), which turn on a variety of genes that affect the immune response. Following mTBI, the researchers saw a large increase in IFN-I-related genes in infected compared to non-infected mice.

Additional experiments confirmed the importance of IFN-I in shifting the focus of the immune system away from blood vessel repair. Mice that have had their genome altered so that their immune cells cannot sense the presence of IFN-1 showed similar rates of repair after mTBI regardless of whether they had a viral infection. Deleting the IFN-I sensor only in one type of immune cell known to be important for repairing blood vessels after mTBI also eliminated the defect produced by infection. Finally, directly applying one of the IFN-I proteins directly to the injury site prevented blood vessel repair without the presence of infection. IFN-I signaling also appeared to play a critical role in the repair delay seen in CVI mice.

Systemic infections are common among patients hospitalized for TBI and CVI, and they have been linked to poorer outcomes. The findings in this study highlight the importance of controlling those infections (whether bacterial or viral) as quickly as possible. This is especially true for CVI patients, as a delay in repair can lead to permanent damage to the brain.

This study was supported by the Intramural Research Program at NINDS.