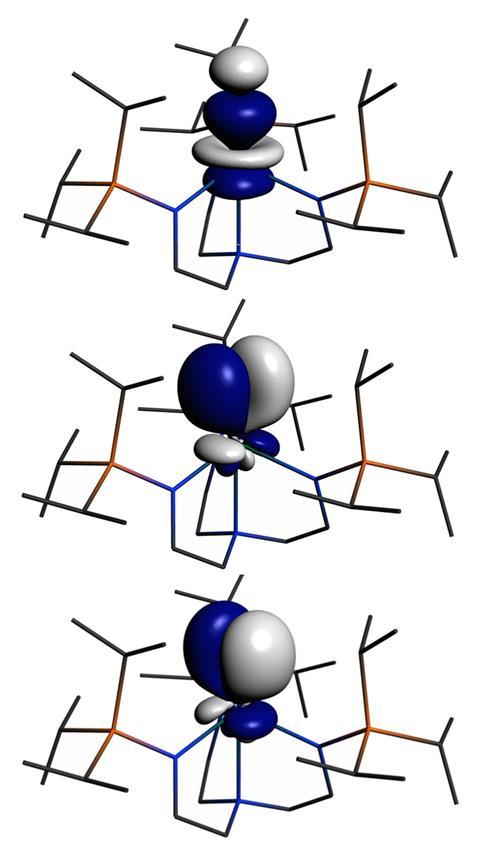 Uranium forms an unusually strong triple covalent bond with nitrile groups, confounding predictions about the bond strength of actinides compared with the remainder of the periodic table.

Elements usually follow a pattern in the strength of their covalent bonds, with groups 1 and 2 forming more ionic bonds and covalency increasing as you move across the periodic table. While the bond strengths of actinides have not been studied in depth, they are likely to sit between the ionic lanthanides and the more covalent d-block elements.

However, computational analysis had suggested that uranium, an actinide, forms stronger covalent bonds than the transition metals – chromium, molybdenum and tungsten – in group 6. A group led by Stephen Liddle at the University of Manchester, UK, now decided to investigate the covalency of uranium’s bonds experimentally to see if the predictions held up.

The team used nitrogen nuclear magnetic resonance (15N NMR) spectroscopy to probe a terminal uranium(vi) nitride complex, and found the nitrogen in the U–N triple bond had a very large chemical shift. The team then used density functional theory calculations, along with a technique known as NMR shielding tensor analysis, to determine the bond strength. These indicated it was more covalent than equivalent bonds in elements in group 4–6.

Liddle describes the results as a ‘turn up for the books’, highlighting that the investigation ‘redefines the parameters of 15N NMR spectroscopy’. ‘Even more importantly, data that suggest the U–N triple bond is more covalent than d-block analogues rather tips the anticipated ordering [of covalency in the periodic table] on its head,’ he adds.

The bond strength also confirms a prediction made more than 100 years ago by Nobel prize winner Fritz Haber, who observed that uranium was the best catalyst for nitrogen fixation – although from 1909, iron was used as it is more cost-effective. Today, the Haber process, used to create ammonia via nitrogen from air for products including fertilisers, is credited with saving billions of lives from famine.

Thomas Albrecht-Schönzart, director of the Center for Actinide Science & Technology at Florida State University, US, praised the work as ‘remarkable’, with important implications in catalysis. ‘Haber’s historic observation that uranium was the best catalyst for this reaction continues to bear fruit in unexpected areas,’ he says.

Jochen Autschbach, a professor at the State University of New York at Buffalo, US, who developed the relativistic shielding analysis used by Liddle’s team, says that ‘this combination of theory and NMR experiments is a very powerful tool’ for determining covalent bonding characteristics. ‘More generally, when there are claims of extraordinary bonding, it is always good to back this up with as many theory and experiment comparisons as possible,’ he adds. ‘Likely, systems with comparably strong covalent bonds involving uranium will continue to be discovered.’