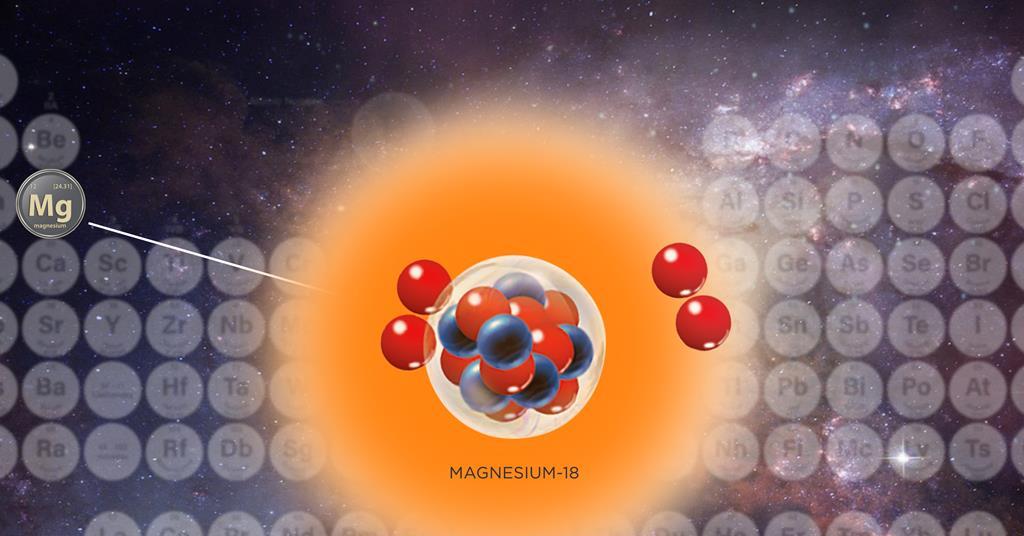 An isotope of magnesium has been discovered that has a shorter half-life than the time it takes to attract electrons, representing a potential boundary to chemistry when it comes to the chart of nuclides.

More than 3000 different nuclides – isotopes of the elements – have been discovered to date, although only 252 are considered stable. A US and Chinese team has now created the lightest magnesium isotope known – with too few neutrons to exist for more than moments – at the National Superconducting Cyclotron Laboratory in Michigan State University, US.

On investigation, the team detected signs of oxygen-14 and four protons as the beam hit the second target. This experimental evidence, along with theoretical simulations by the team, points to the creation of a magnesium-18 cation with a half-life of around three zeptoseconds (1×10−21 seconds), or three sextillionths of a second.

This is less than the shortest period of time ever measured using current instrumentation, 247 zeptoseconds, the time it takes a photon to cross a hydrogen atom, observed by a team at Goethe University Frankfurt in 2020.

‘For isotopes like this with very short half-lives we are not measuring time directly,’ explains Kyle Brown, assistant professor of chemistry at Michigan State University. ‘Instead, we can infer the lifetime from the resonance [observed].’ This is similar to the technique used for other short-lived isotopes, such as oxygen-11, also first observed by this team.

Crucially, the approximate half-life of magnesium-18 is around a billion times shorter than 1×10-14 seconds, the International Union of Pure and Applied Chemistry-recognised time it takes for an atom to attract electrons. This, and similar isotopes, would therefore not be able to form bonds and, as such, represent a boundary beyond which no chemical investigations could ever be performed, even though lighter isotopes of magnesium are waiting to be discovered.

The new isotope’s short half-life means it does not exist naturally outside of supernovae and neutron star collisions. However, Brown says, magnesium-18 would still be familiar if it could be stabilised. ‘From the chemistry side of things, if we could add in the electrons, the chemical properties of magnesium-18 should be identical to all of the other isotopes of magnesium.’

Robert Eichler, a nuclear chemist at the Paul Scherrer Institute, Switzerland, observes that direct time measurements are not possible with such isotopes at present, and therefore the team’s work constitutes an isotope’s discovery. ‘The creation of an isotope is considered if its atomic nucleus is formed, still being in a highly ionised state or fully stripped of electrons,’ he says. ‘For the discovery of a new element, however, the timescale of survival of magnesium-18 would not be enough.’ For a new chemical element to be recognised it has to survive for at least 1×10-14 seconds – long enough to attract an electron.

Michigan State University is poised to expand the number of known nuclei even further thanks to its Facility for Rare Isotope Beams, which is due to come online later this year.