Phosphorene nanoribbons – a promising material synthesised just three years ago – have already found their first application, in a perovskite solar cell.1 ‘It is impressive that such excellent results have come through [the] pipeline so rapidly,’ comments David Lewis from the University of Manchester, UK, who was not involved in the study.

Phosphorene is a monolayer material obtained by exfoliating black phosphorus crystals. Nanoribbons made from phosphorene are an atom thick layer, however unlike 2D sheets they’re only tens of atoms wide, explains Chris Howard from University College London, UK, co-author on this paper. Howard’s team first isolated and characterised these structures in 2019.2 ‘Our work was motivated by hundreds of theory papers predicting extraordinary properties for phosphorene nanoribbons,’ he says. Some of these potential applications include fast-charging batteries, quicker transistors and more efficient optoelectronic devices for high-speed telecommunications. 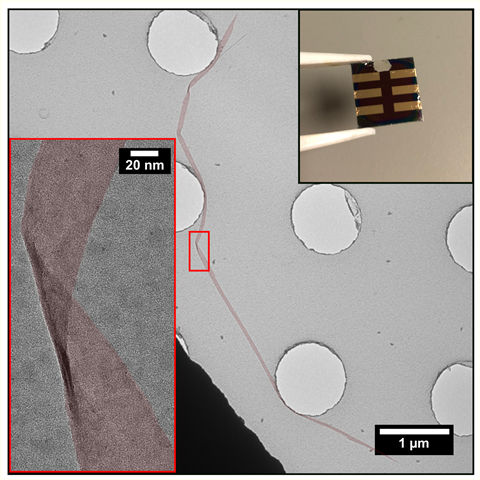 Howard’s team, in collaboration with solar cell experts at Imperial College London, UK, has now enhanced the performance of perovskite devices using phosphorene nanoribbons. ‘We simply add [them] between the semiconducting polymer and the perovskite absorber layers,’ explains Tom Macdonald from Imperial, who led the study.

Perovskite solar cells separate positive and negative charge carriers after absorbing light, explains Lewis. This leads to the generation of electrical currents. Semiconductors like phosphorene nanoribbons enhance the extraction of positive charges or holes. ‘The addition of phosphorene nanoribbons provides a favourable energy alignment between the [layers], allowing a more effective avenue for hole extraction,’ explains Macdonald. The ‘incredibly high mobility’ of phosphorene also boosts performance. Improving the efficiency of hole extraction ‘provides a new strategy to improve the overall efficiency of these devices’, Lewis adds. ‘The authors show this unambiguously with a nice suite of experiments.’ 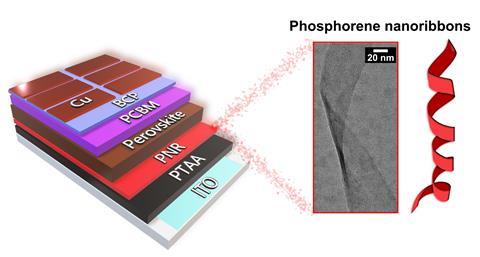 The researchers added the extra layer of phosphorene nanoribbons using spin-coating, a standard technique in perovskite solar cell production. This is an ‘advantage of the simple processability of phosphorene nanoribbons in solution’, explains Macdonald. This process involves separating the individual phosphorene layers from crystalline black phosphorus and adding a lithium salt in a solvent, explains Lewis. ‘This means a myriad of opportunities for scale-up, [as] you could make large batches of the material,’ he adds. Macdonald says that ‘scale-up is certainly part of our future plans’.

Researchers now expect many applications beyond solar cells. ‘The future is very bright for phosphorene nanoribbons in optoelectronics,’ says Macdonald. Lewis agrees and says the ‘really exciting part’ is how just a very thin layer of phosphorene nanoribbons yields ‘dramatic improvements’. ‘[We] will see many applications using this interlayer engineering approach in other devices,’ he adds.

Macdonald confirms that they’re already exploring the possibilities of phosphorene nanoribbons in light-emitting diodes and batteries, among other things. ‘This [is] only the tip of the iceberg.’