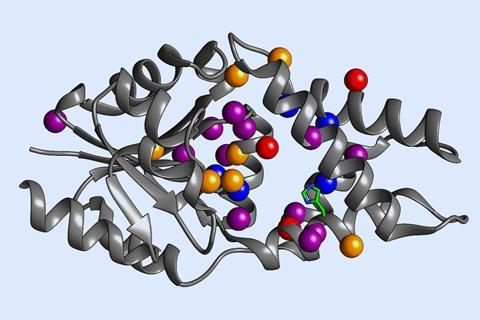 An engineered enzyme has been created to carry out a notoriously slow organic reaction, and it far outperforms all other known catalysts for this transformation.

The development applies biochemical techniques to the Morita–Baylis–Hillman (MBH) reaction, which is typically used to form a carbon–carbon bond between an alkene and carbon electrophile, such as an aldehyde, thereby creating products typically used in further syntheses.

But although it’s extremely useful in organic synthesis, the MBH reaction is very slow with existing catalysts – usually small-molecule nucleophiles such as imidazole – which often take days and sometimes weeks to produce a useful amount of a product. In comparison, the newly engineered enzyme – designated BH32.14 – is orders of magnitudes faster and is also enantioselective.

Results show that even very low concentrations of the BH32.14 enzyme added to the MBH reaction greatly outperform much larger concentrations of existing catalysts. By contrast the reaction takes just a few hours rather than several days, says Anthony Green, a professor in organic and biological chemistry at the University of Manchester and the senior author of the new study.

‘The typical catalysts you use for this reaction are small nucleophiles,’ Green says. ‘The beauty of biology is that if you can engineer an enzyme or design a protein to do this reaction, the rate acceleration is significant compared to anything that’s been achieved with small-molecule chemistry.’

The MBH reaction is the most complex reaction that enzyme engineering has been applied to so far.

The new enzyme was created from a computationally-designed protein, designated BH32, that was developed a few years ago by a team led by biochemist David Baker at the University of Washington in Seattle. Baker is a co-author on the latest study. 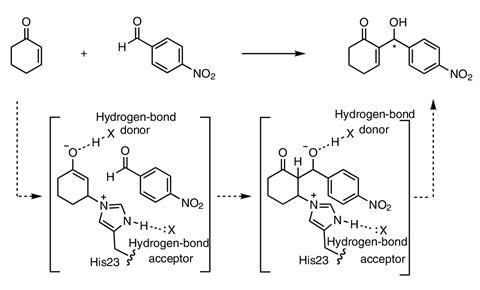 Green explains that Baker’s team had hoped to develop an enzyme to act as an efficient catalyst in the MBH reaction but obtained enzymes that acted only weakly. ‘They were catalytically constant, but they certainly weren’t viable catalysts,’ Green says.

To create the BH32.14 enzyme, the researchers led by Green applied ‘evolutionary optimisation’ to the enzymes developed by Baker’s team – a process of applying protein engineering technologies, automation, and high-throughput screening to iteratively improve the enzyme, and which took almost two years to complete. Now that it’s fully identified, the enzyme can quickly be made in useful amounts through DNA synthesis, Green adds.

The development shows the promise of engineering enzymes and other proteins as catalysts in demanding multistep processes like the MBH reaction. ‘New catalytic mechanisms can be engineered into proteins to accelerate more challenging chemical transformations,’ the researchers write.

Tim Bugg, a professor of biological chemistry at the University of Warwick who was not involved in the study, says the results verify that BH32.14 performed favourably compared with existing small-molecule catalysts. ‘The resulting engineered enzymes can catalyse the MBH reaction using a range of substrates, in good yield and high enantiomeric excess,’ he says.

The approach taken by Green and his colleagues shows the potential of enzyme engineering for the discovery of new catalysts not found in nature, an approach that ‘could be used for green chemistry approaches to synthesis’, he says.