Commercial ‘blue energy’ is one step closer with the development of a new ion-exchange membrane that dramatically increases the efficiency of energy generation from the salt concentration gradients which exist where a river meets the sea. This membrane overcomes the performance stalemate which has hindered the development of this renewable resource, using a self-assembled polymer to create an ordered nanostructure for ion filtration.

Blue energy, also known as osmotic power, exists wherever there is a difference in salt concentration and is an untapped source of sustainable energy. In the 1970s, it was estimated that between 1.4 and 2.6TW of electricity – close to the world’s entire electricity demand at this time – could be generated if this energy was harvested. Since then, reverse electrodialysis cells have been developed that convert this potential energy into electricity by selectively transporting ions through alternating layers of anion- and cation-selective membranes in the cell.

‘There are two things that will help you produce a lot of energy quickly,’ explains Orlando Coronell, a membrane researcher from the University of North Carolina at Chapel Hill in the US. ‘The membrane should have many transport pathways and the ions should be able to go through those pathways fast as opposed to slowly – that’s called conductivity. And only the anions, not the cations, should go through the anion-selective membrane – that’s called permselectivity.’ However, balancing these properties has proven tricky: while increasing the charge of the membrane increases the conductivity, it also makes the polymer absorb water, resulting in swollen pores and a loss of ion selectivity. 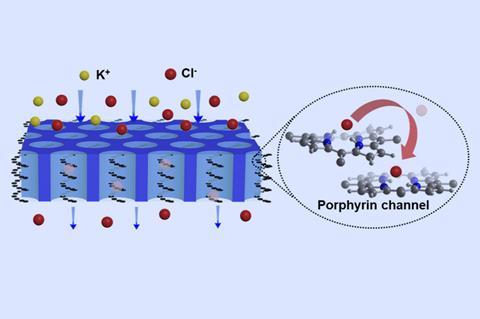 The researchers, led by Longcheng Gao at Beihang University in China were investigating this trade-off and prepared a standard copolymer membrane, using small amounts of the charged molecule porphyrin to initiate a cascade of reactions. But while the team expected a small amount of the porphyrin initiator to be incorporated, they were surprised by the unusual microstructure of the resulting material. ‘The porphyrin should have been distributed randomly in the polymer matrix,’ explains Gao. ‘But unexpectedly it formed transmembrane helix channels.’ The organised arrangement of the porphyrin molecules arises from π stacking, a weakly attractive interaction between nearby π bonds.

Unlike conventional membranes in which the ions diffuse through open channels, these transmembrane porphyrin helices transport anions via a coordination mechanism, essentially passing the ion from molecule to molecule through the membrane. Porphyrin’s strong affinity for chloride ions boosts the membrane’s conductivity, while the low porphyrin content prevents the uptake of excess water that would reduce the permselectivity. This arrangement has resulted in an unprecedented four-fold increase in the power density of the membrane, providing a significant boost to the efficiency of reverse electrodialysis. ‘We found that how the ion-exchange groups are organised is more important than their high content [or concentration],’ explains Gao. ‘The resultant microstructures overcome the trade-off.’

‘I think it’s an interesting and important approach,’ comments Coronell. ‘But there are two important needs for future study: one, to look at the constituents of real-life waters and see how they impact the performance of the membrane; and two, the membrane needs to be scaled up.’

The Chinese team is already tacking these challenges and is continuing to develop both anion- and cation-selective membranes for reverse electrodialysis applications. ‘Desalination, water purification, fuel cells. All these processes face the same bottleneck: the selectivity–conductivity trade-off,’ says Gao. ‘We hope our strategy will help the design of a new generation of ion-exchange membranes over a wide range of fields.’