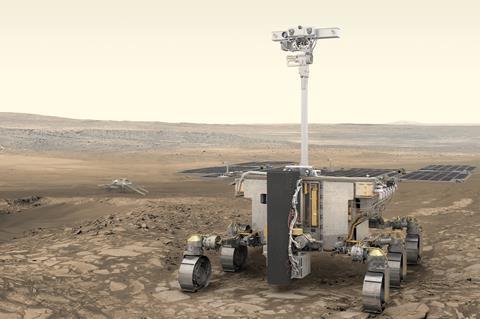 The European Space Agency (Esa) has announced that its record-breaking €16.9 billion (£14.6 billion) budget will cover building the lander that will get the Rosalind Franklin rover to the surface of Mars. The ExoMars rover was due to launch aboard a Russian rocket in September to search for signs of life on Mars, but it became clear earlier this year that sanctions on Russia following its invasion of Ukraine would delay its departure.

The launch of the rover, named after the British chemist whose pivotal work led to the discovery of DNA’s structure, is now planned for 2028. Esa said UK industry is set to play a leading role in developing a new landing platform, and Nasa has reportedly agreed to contribute the launch rocket, as well as an engine for the descent module.

The Rosalind Franklin rover mission has been made possible by a €360 million infusion recently approved by Esa member states. The funding will be used to design and build a new lander for the rover, and to pay the ongoing costs related to the Trace Gas Orbiter, the satellite that will communicate with the rover and carry the scientific instruments for characterising trace gases in the Martian atmosphere.

The mission is part of the international ExoMars programme led by Esa and formerly the Russian state space agency Roscosmos. The rover was due to land on the red planet in June 2023 and search for traces of prebiotic chemistry 2m beneath the surface – probing deeper than any other rover so far. The original launch date was in 2018 but technical difficulties forced a delay to 2020, at which point the pandemic and associated restrictions pushed things back to September 2022.

Once Esa officially ended its cooperation with Russia on the ExoMars rover in July, Dmitry Rogozin – the head of Roscomos at the time – posted a message on a Telegram account calling Esa chief Josef Aschbacher an ‘irresponsible bureaucrat’. Rogozin questioned whether Aschbacher considered ‘how many thousands of scientists and engineers in Europe and Russia he crossed out with his decision’, and asked whether he is ‘ready to answer for sabotaging a joint Martian mission’. Rogozin said he retaliated by telling the Russian crew on the International Space Station (ISS) to end cooperation with Europe.

Russian officials have confirmed that the country will pull out of the ISS programme by 2024 and develop its own space station.