A collaborative effort is underway at Oak Ridge National Laboratory (ORNL) in Tennessee, US, to explore the chemistry of radium and use those discoveries to advance cancer treatments. The aim is to couple the cytotoxicity of α-particles with the tumour specificity of biological targeting vectors to selectively destroy cancer cells.

Medicinal chemist Nikki Thiele leads the project’s experimental efforts, while physical chemist Alexander Ivanov heads the computational aspects. And senior scientist Paul Benny – who has been working with diagnostic and therapeutic radionuclides for decades – oversees production of the radioisotopes.

The team has captured atomic-level details on radium chelation, and has discovered that a chelator dubbed ‘macropa’ has the highest affinity at physiological pH ever reported for the radium ion. 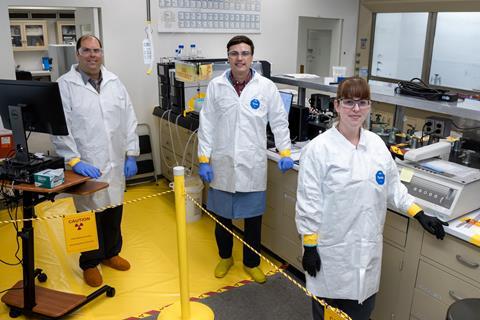 Radium-223 is the only α-particle emitting radioisotope that’s currently approved by the US Food and Drug Administration (FDA) as a cancer therapy. It has been used to treat bone cancer in patients with metastasised prostate cancer, but the ORNL team says radium-223 could treat any cancer if it can be delivered to the right location.

Radium mimics calcium in the body so it’s naturally taken up by bone, and it kills cancer cells by emitting very high energy α-particles. ‘These particles are a form of ionising radiation, which causes double-strand breaks in the DNA,’ Thiele explains.

The team wants to expand the therapeutic utility of radium-223 to treat soft tissue cancer metastases, and to do this they need to be able to bind and shuttle the radium ion, redirecting it to these tumours outside of the bone. This requires chelators for radium-223 but these have remained elusive.

To develop such improved chelators, the ORNL team is working to understand the coordination chemistry of radium. ‘Coordination chemistry describes the binding interactions between a metal and the active groups of molecules,’ Ivanov explains. ‘And if you know these fundamentals, this will give us a foundation to design new, more stable and more selective chelators.’ 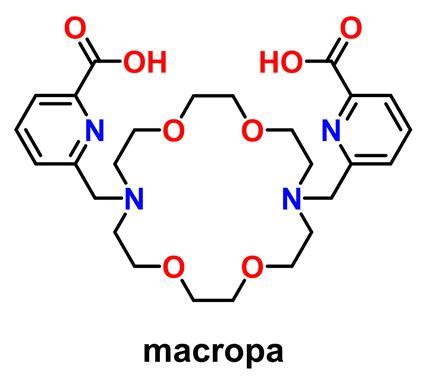 One of the 17 US Department of Energy (DOE) national laboratories, ORNL actually produces the radium-223 precursor actinium-227 for the international chemicals giant Bayer, under a contract that began several years ago. The treatment is marketed as Xofigo, which was approved by the FDA in May 2013.

‘We are in a very good position here at ORNL to look at radium’s chemistry,’ Thiele notes. ‘We have access here to significant amounts of radium-223 to do this basic science research.’ She cannot quantify the amount of this isotope available at ORNL but describes its supply as ‘sufficient to meet the demand for worldwide use of Xofigo’ as a metastatic prostate cancer treatment.

While Thiele’s team determines the stability constants of radium-223 experimentally, to show the strength of interaction between a given molecule and radium, Ivanov’s group works to gain insights into atomic-level details that are needed to understand how orbitals interact.

‘Radium is this big, fluffy, diffuse ball of positive charge, and chelators are negatively charged so the bonding interactions between radium and chelators are electrostatic,’ Thiele explains. ‘But radium is so fluffy and so diffuse in its charge that no chelator can really hang on to the radium ion, particularly in vivo.’ So, she and colleagues are trying to find a chelator that can stabilise the radium enough to then shuttle it to a tumour cell.

Ivanov echoes the sentiment. ‘Yeah, we’re basically trying to catch this fluffy ball,’ he says. To do that he and colleagues use quantum chemical calculations that allow them to peer inside radium to see its electronic structure, and how the ligand molecule orbitals overlap with vacant orbitals on radium. They have found that the bonding is ionic, and that electrostatic attraction plays a huge role. 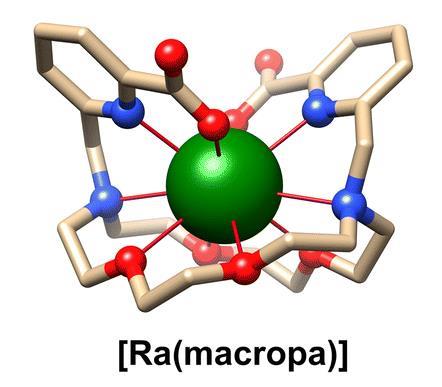 ‘There are lots of molecules available – like hundreds of millions of different molecules – that can potentially bind and stabilise radium, and new machine learning methods and AI methods could help us to identify these molecules,’ Ivanov says. But he underscores the importance of Thiele’s experimental efforts to check such theoretical predictions.

Not only does Ivanov want to know these experimental values to determine if his computations are accurate, but Thiele is also keen to find out whether her experimental values can be reproduced computationally. With that knowledge, they can continue to improve the model to increasingly be more effective in predicting stabilities for radium complexes.

Meanwhile, none of this work would be possible if Benny and his team weren’t producing radioisotopes. They go through a series of separations to isolate the radium away from the actinium-227 and thorium-227 parents, and then they produce it in a form that is usable for Thiele’s experiments, Benny explains.

The teamwork won’t end once the ORNL researchers have identified suitable chelators for radium, which they hope will be soon. At that point, they will need to collaborate with others who have expertise that they don’t have at ORNL.

For example, to determine whether any hypothetical new chelator can deliver radium-223 to tumours, the researchers would need to collaborate with one of more individuals who have access to animal facilities so that the tumors can be examined, most likely in a mouse model. Such partners could, for example, be biochemists at another institution, or scientists who work at hospitals or medical facilities.

Justin Wilson, a professor in the chemistry and chemical biology department at Cornell University in New York, US, who was not involved in this research, is enthusiastic about the work at ORNL. He notes that radium has been an obscure element historically, though it was important to Marie Curie’s initial discovery of radiation more than a century ago. It didn’t attract much attention until in 2013 when radium was approved as a treatment for bone metastases from prostate cancer, he says.

‘Since then, the thought process on radium has kind of flipped – it has generated a lot of interest in terms of understanding the chemistry of this element and whether scientists can harness its chemical properties to diversify its use as a therapeutic agent,’ recalls Wilson, who has expertise in radiometal chelation.

This new ORNL research has provided fundamental thermodynamic data about how radium interacts with a couple of chemical chelators, he says. That’s important because it is so radioactive, and such an unusual element, that a lot of this information simply hasn’t been available.

Efforts to make chelators for radium to change its biodistribution and tumour-targeting properties have effectively been operating in the dark, but this latest work out of ORNL offers an experimental means of assessing how effective various chelators are in terms of their thermodynamic binding affinity for radium, says Wilson.

He is impressed that this team worked so successfully on a radioactive element. ‘Not only is the analytical chemistry thorough – in order to get these analytical values, you have to be very precise and very careful in the way that you make your measurements – but then you are also dealing with radioactive material that presents a potential radiological hazard and is not very available to most research labs,’ Wilson tells Chemistry World.

He hopes that this work will inspire others to adopt some of these techniques in their own labs and use them more broadly to measure radium stability constants. ‘If we get enough critical mass, and we start to build up a lot of data in terms of thermodynamic affinity for radium, then that combined with computational data will give us some predictive power in terms of how we design our chelators, which would be neat,’ Wilson states.

Gauthier Deblonde, a radiochemist in the nuclear and chemical sciences division of Lawrence Livermore National Laboratory in California, agrees that the ORNL team could have a strong impact on the emerging type of cancer treatments known as targeted alpha therapies.

These researchers seem to have solved the main problem with radium as a cancer therapy, which is that classic organic chelators do not work with radium, says Deblonde, who also wasn’t involved in the ORNL studies.

There is significant concern, meanwhile, about the current lack of radiochemistry expertise in many parts of the world – including the US, Europe and Australia. Indeed, senior scientists who entered the field in the 1970s are reaching retirement age and there doesn’t seem to be a sufficient cadre of researchers in the pipeline.

‘There is not enough radiochemistry training, there aren’t enough programmes in academia or even at the US DOE national laboratories to train people, and that’s something that would be great to have,’ Thiele warns.

Ivanov suggests that part of the problem also has to do with the poor availability of these isotopes. They are accessible at ORNL, but not at most universities or research institutions. ‘It’s a long process just to request this isotope, and it can be costly,’ he says.

There are also safety questions inherent in working with radioisotopes, plus such research is extremely difficult and time-consuming. ‘Writing the proposal, then getting the isotopes and talking to safety folks, and transferring these isotopes from one facility to another, is a long process,’ Ivanvov says. He suggests that this might also explain the shortage of staff interested in doing the radiological experiments.