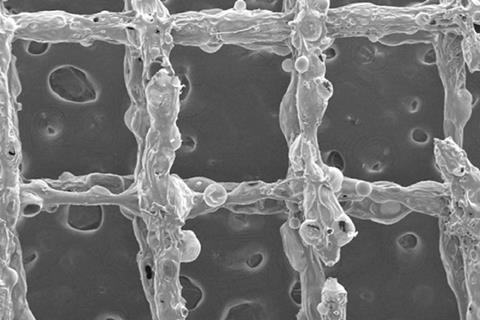 A simple protocol has been developed to make single-atom catalysts using 3D printing. The researchers believe the procedure, which removes the need for a variety of complex and expensive synthetic processes, could prove scalable and therefore allow industry to benefit from the advantages of single-atom catalysis.

In single-atom catalysts, the catalyst is atomically dispersed – usually on a solid substrate. This offers several advantages over traditional heterogeneous catalysts, such as greater atom economy and the potential to tailor reaction pathways with tailored coordination environments. ‘Single-atom catalysts are somehow in between heterogeneous and homogeneous catalysts,’ explains Fangxi Xie of the University of Adelaide, Australia. Unfortunately, producing them is usually difficult and expensive, involving the implantation of defects into substrates or the growth of microporous crystalline frameworks. These processes have not proved sufficiently scalable for widespread commercialisation.

Xie and colleagues, led by Shi-Zhang Qiao, employed iron acetylacetonate and natural polymers to form an ink. They then deposited this on substrates in a variety of different patterns before freeze-drying it to remove excess water. Finally, they heated the printed scaffold to 700°C. When they examined the resulting structure using multiple characterisation methods, they confirmed that the metal atoms were atomically dispersed on carbon substrates, with no evidence of cluster formation. Moreover, the material was an excellent electrocatalyst for the reduction of nitrate to ammonia.

By adding complexes of different transition metals to the ink, the researchers could fabricate similar catalysts containing other transition metals such as nickel, copper, zinc and platinum. ‘Our team will further explore the potential of 3D-printed single-atom catalysts in various applications, such as catalysis in other chemical reactions, which are critical in the chemical engineering industry,’ said Qiao.

Bert Weckhuysen of the University of Utrecht in the Netherlands is intrigued by the work. ‘The elegance of this new synthesis method is in the versatility of the 3D printing methodology, which allows for a wide variety of macroscopic objects with various chemical compositions to be made, and hence also to explore it in various existing and new application domains, including small catalytic devices,’ he says. ‘One of my questions pertains to the long-term stability of these 3D-printed objects, and if they can withstand the practical environments of a real-life catalytic device, including the presence of eg impurities… The future will tell if this is indeed the case or if further modifications have to be introduced to allow this elegant synthesis method to enter the catalyst market.’