Synthetic biology has been combined with electrical engineering to create a small bioelectric sensor that can sense water contaminants in just minutes.

The sensor is currently at the prototype stage and is not yet being produced commercially, but has already been used to detect thiosulfate, known to cause algal blooms, within 2 minutes and also the endocrine disruptor 4-hydroxytamoxifen (4-HT) within 3 minutes.

Detection methods for these environmental pollutants, and others such as nitrates and phosphates, do exist. These include mass spectrometry and other kinds of analysis, but can take a long time, require sophisticated instruments and laboratory preparation of samples.

‘We think that that ability to know that something bad is happening and intervene quickly is super critical,’ says Caroline Ajo-Franklin, a professor at Rice University, who co-led the research. Many other biosensors use colour or fluorescence as a way of signalling that a chemical of interest is present. ‘The problem is a lot of environments are opaque and you just can’t use optical readouts,’ explains Ajo-Franklin. 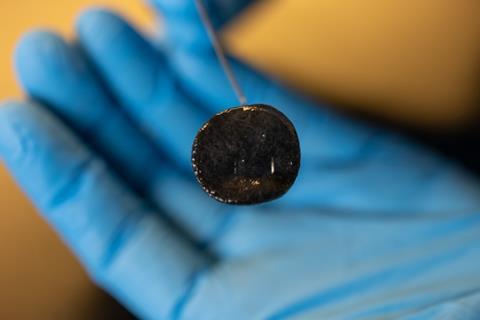 The team engineered Escherichia coli to produce electrical current when a chemical of interest is present. Co-lead researcher Jonathan Silberg, also at Rice, describes this as being a bit like a wire that normally directs electrons to flow from a cellular chemical to an electrode, but is currently broken in the middle. When the contaminant comes into contact with the bacteria, the wire reconnects the pathway, producing an electrical signal.

The E. coli in the prototype has a modular, synthetic electron transport chain. A key factor is that this chain can be modified to sense different chemicals. In this study a sulfate and an endocrine disruptor were detected, but the researchers plan to expand the scope of the sensor to cover other contaminants in future.

Ajo-Franklin describes their prototype as looking a bit like a hockey puck in shape and size. ‘We’ve developed ways of physically making sure that all of the bacteria in this device stay inside the device. That’s a really critical piece to actually be able to deploy it in the environment.’

While the current version of the sensor is a handheld device that can be used in the field, the team hopes to create a device that could be left in water for remote sensing.

Bioelectronics expert Tom Zajdel at Carnegie Mellon University agrees that long term placement of these devices would be ideal. He adds that they have the advantage of not requiring a lot of power to run, but cautions ‘I think the longevity of the sensor is the biggest challenge, the biggest unknown.’

The Rice team is now planning to improve and expand the capabilities of their sensor. One way they are doing this is to explore the potential of detecting multiple chemicals at the same time. ‘We’re looking to multiplex in two different ways. One is spatially, but the other thing that we’re doing is multiplexing based on different electron transfer pathways that have different redox potentials,’ explains Ajo-Franklin.

The researchers also want to explore whether a similar electron transport chain could be engineered in other microbes, such as those that are able to live in salt or brackish water, as E. coli is not suitable for testing every type of water sample.